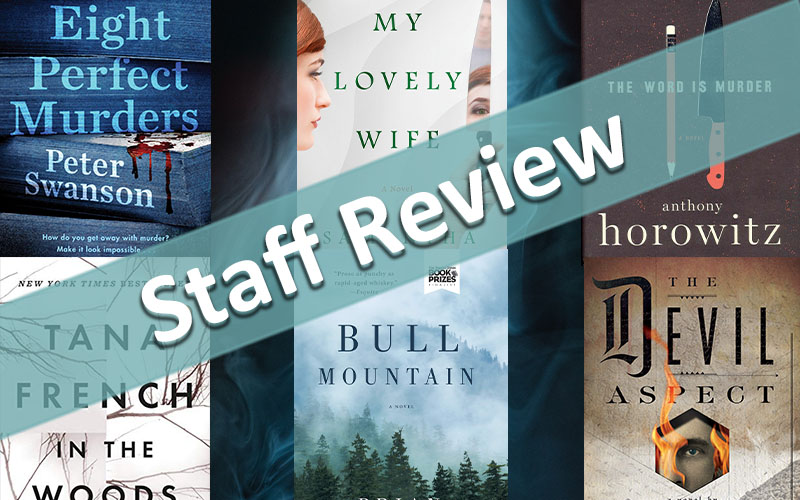 So, an FBI agent walks into your bookshop and wants to ask you a few questions. It appears that you penned a blog post way back in 2004 entitled “Eight Perfect Murders,” listing your take on the eight closest-to-perfect murders ever published in mystery novels. Now, years later, an enterprising FBI agent discovers a possible connection between your fictional list and a very real series of murders. You’ve got some explaining to do—which is problematic, because you’re just full of secrets.

This is the premise of “Eight Perfect Murders” by Peter Swanson. It’s a good book and I recommend you read it, but that’s not why we’re gathered here today.

The protagonist in Swanson’s book got me in the mood for making lists. So I present to you my take on the five best mysteries that the Carnegie-Stout Public Library has to offer.

Why not eight you ask? Because I only thought of five. But if you add “Eight Perfect Murders,” you’ve got six great mystery novels to get you past this last frigid stretch until spring. However, I must insist you don’t use any of the modus operandi contained within these titles to commit any perfect murders of your own.

1. “The Devil Aspect” by Craig Russell

Czechoslovakia, 1935. Shortly before the Nazi occupation, Jung-trained psychologist Viktor Kosárek finds himself already immersed in darkness. He’s the newest staff member at the Hrad Orlu Asylum for the criminally insane. A converted medieval castle that’s home to Czechoslovakia’s six most brutal killers—The Woodcutter, The Clown, The Glass Collector, The Vegetarian, The Sciomancer, and The Demon. Kosárek attempts to help these maniacs written off by society with his state-of-the-art treatments. But he is soon called upon to use his unusual techniques to help track down a new killer stalking the streets in nearby Prague.

2. “The Word is Murder” by Anthony Horowitz

I normally detest metafiction. When authors write themselves into their own tales, I usually find it a bit pretentious. It can be a little weird and distract from the story. Horowitz, luckily, has changed my perception with his Hawthorne and Horowitz series. Author Anthony Horowitz is tasked with writing a series of mystery novels about the exploits of brilliant ex-detective Daniel Hawthorne. When real-life murder interferes with their project, Horowitz becomes the unwitting sidekick of the unconventional Hawthorne as they endeavor to solve a famous actor’s murder.

I recommend Tana French’s Dublin Murder Squad series to anyone who will listen. Each gritty, richly detailed, character-driven novel follows a different detective on the squad as they solve murder cases in Dublin. These mystery books have a unique structure, in that a minor character in a previous novel becomes the first-person narrator in the next. This allows readers inside the minds of related characters with differing experiences and perceptions on the cases that they solve. Fans of police procedurals and psychological suspense will be hooked from the first page.

Often characterized as southern fiction or hillbilly noir, the works of Brian Panowich never disappoint. “Bull Mountain” tells the story of Clayton Burroughs, whose family rules the titular Georgian mountain with an iron fist. Running various illicit activities to turn a profit, the Burroughs clan has conducted their operations with legal impunity for years. That is, until youngest brother Clayton shocks and appalls his family by becoming sheriff of the neighboring community. And when an ambitious ATF agent looking to take down the Burroughs organization approaches Clayton, he must decide where his ultimate loyalties lie.

5. “My Lovely Wife” by Samantha Downing

An average suburban couple find themselves growing bored with their vanilla lives. Do they go to counselling, pick up a new hobby, or maybe join a book club? Nah, they decide to murder people. It begins innocently enough. They talk about ways to get away with murder and discuss how it would feel to give in to their violent fantasies. But then they pick a target, stalk their prey a little, and make a plan. And all of a sudden things aren’t so hypothetical. They become addicted from the first slash, so to speak. As their victims accrue, the unnamed husband finds out that his lovely wife has kept one of their targets alive in an abandoned house for over a year to administer a myriad of tortures. This isn’t what he signed up for, but what is a husband to do?

As the protagonist in “Eight Perfect Murders” succinctly states on page 36:
‘Books are time travel. True readers all know this. But books don’t just take you back to the time in which they were written; they can take you back to different versions of yourself.’

So whether you’re reading one of the books on this list for the first time, or you’re revisiting an old friend, allow it to transport you somewhere else for a bit. Preferably somewhere warm.