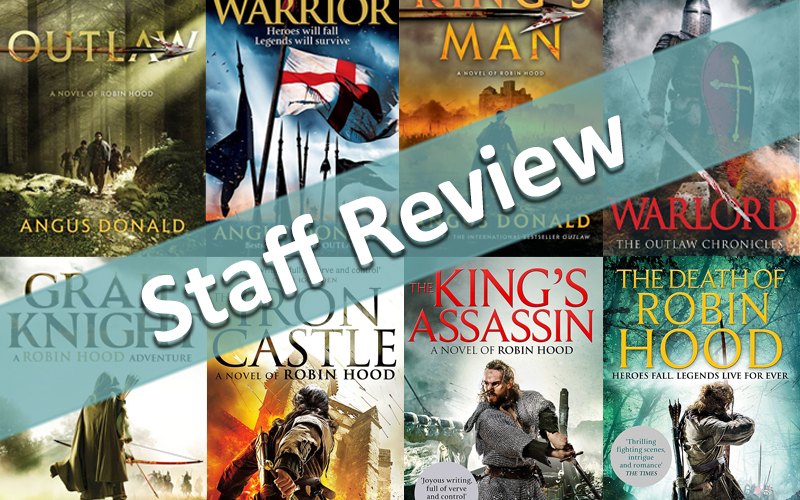 What do you think of when you hear the name Robin Hood? An accomplished archer? A scoundrel with a merry band of thieves robbing passersby on the King’s Road? How about that guy in the funny costume in Robin Hood Men in Tights or the anthropomorphized fox in the 1970s Disney movie? Robin Hood has been all of these things in his myriad popular culture manifestations, to the extent that one would think that the story is all dried up. Between Robin of the Hood’s genesis in 15th century ballads to medieval plays, modern children’s stories, movies, and novels, you may think that there are no further Robin Hood tales to tell. Angus Donald is here to show you that you’re wrong, in all his swashbuckling, gritty, dry-humored glory.

In Donald’s retelling, the quasi-mythical antihero manifests as Robert Odo, once the Earl of Locksley, now known to his enemies as the vicious and cunning outlaw Robin Hood. Young Robin is attainted, stripped of his lands and titles, and forced to flee into Sherwood Forest to escape the evil Sherriff of Nottingham. While lurking in the Sherwood, Robin calls upon some new friends to strike back against the depredations of the Sherriff and becomes a godfather of sorts to the villagers and peasants living under the Sherriff’s oppressive reign. Robin and his men steal from the corrupt local officials, but rather than give their ill-gotten gains to the poor villagers, as often portrayed, this Robin of Locksley hoards the wealth, enriching his own coffers and funding his private war against the Sherriff.

Told from the point of view of Alan a Dale, one of Robin’s Merry Men, The Outlaw Chronicles feature many familiar names to those acquainted with the Robin Hood legend, such as Little John, Friar Tuck, and Will Scarlet. Readers be warned, however—this is no fictional romp through a children’s legend. Throughout the eight books in this series, Alan a Dale tells of Robin’s cruelty, avarice, and violence that he uses to achieve his goals. Robin and company ambush and slaughter the Sherriff’s soldiers, murder and maim detractors, fight in the crusades for King Richard the Lionheart, rebel against the Lionheart’s brother John when he ascends to the throne, and engage in any foul deed necessary to enrich the House of Locksley at the expense of everyone and anyone else.

This Robin is dark, unapologetic, and brutal. Alan a Dale describes his master best in King’s Man, the third novel in the series, when reflecting that in his youth he was “fearful of almost nothing save the wrath of my lord, Robert Odo, the Earl of Locksley—who was better known to the common people of England as Robin Hood—a savage warrior, a lawless thief, a Church condemned heretic and, may Almighty God forgive me, for many years, my good and true friend.”

Fans of historical fiction masters like Ben Kane, Bernard Cornwell, or Conn Iggulden will be hooked on The Outlaw Chronicles from the first page. Brilliant battle scenes, colorful imagery, and well-crafted dialog abound in these tales of nonstop adventure with a backdrop of well-researched actual historic events. Those, like me, who often baulk at starting a book knowing that there is a whole series to follow should not despair—this is one series that is well worth readers’ time.