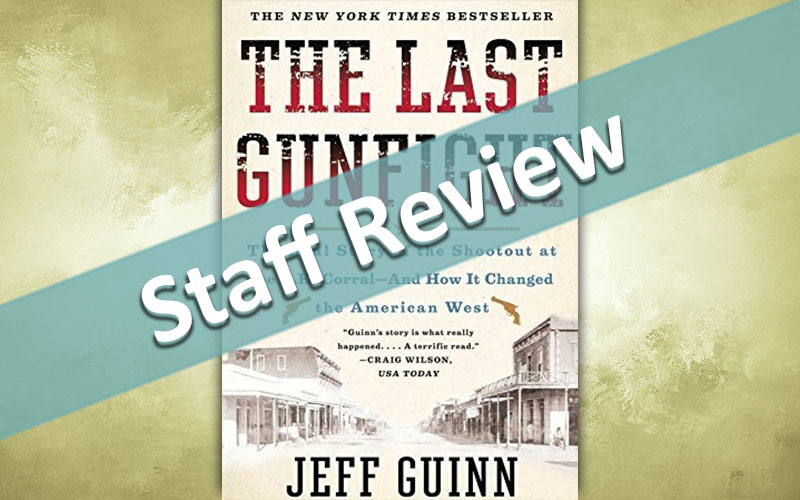 Are you looking for a book recommendation to get you through this burgeoning winter weather? I’m your huckleberry.

I admit it, I’m obsessed with the 1993 cinematic masterpiece “Tombstone.” I’ve watched the shootout at the O.K Corral more times that I’d care to admit, can’t get enough of the devil-may-care antics of the vastly entertaining Doc Holliday, and have challenged friends to ‘say when’ while using a banana as a revolver on more than one occasion.

The romanticized version of historic events that the movie represents is awesome, but was the real story quite so amazing? Did Val Kilmer/Doc Holliday actually trade barbs in Latin with Johnny Ringo in typically brazen fashion, leading to the eminently badass duel in the movie’s denouement? Why did Wyatt Earp and his friends have beef with Ringo and the Cowboys? What exactly is a huckleberry? Jeff Guinn answers most of these questions and more in “The Last Gunfight: The Real Story of the Shootout at the O.K. Corral—And How It Changed the American West.”

A bestselling author of both fiction and nonfiction, Jeff Guinn draws on a plethora of firsthand sources including letters and diary entries to tell the true story of the shootout at the O.K. Corral and the events leading up to that seminal Wild West gunfight. He paints a historic picture that is even more incredible than the movie and shines a light on the larger-than-life historical figures who have influenced how we view the American West.

It turns out that in real life the bad guys didn’t conveniently wear black hats while squaring up with the white hat bedecked heroes on Main Street at high noon. The truth, as is usually the case, is much grayer. The reader’s perception of which side of this conflict was “good” and which was “bad” will likely evolve, as history is rarely as neat and tidy as Hollywood. With solid prose and a smoothly flowing story, lovers of history, the American West, and “Tombstone” alike will delight in this book. This is certainly one of those historic events in which the truth is stranger than fiction.

If you want to negotiate safer territory at your holiday dinner table, avoid the political jibber jabber—talk about the true story behind “Tombstone” instead. Your relatives will love to hear about the shootout at O.K. Corral and Wyatt Earp’s vendetta ride. Just make sure that the drinks are flowing freely. After all, in vino veritas.